powered by the wallhax cheat framework 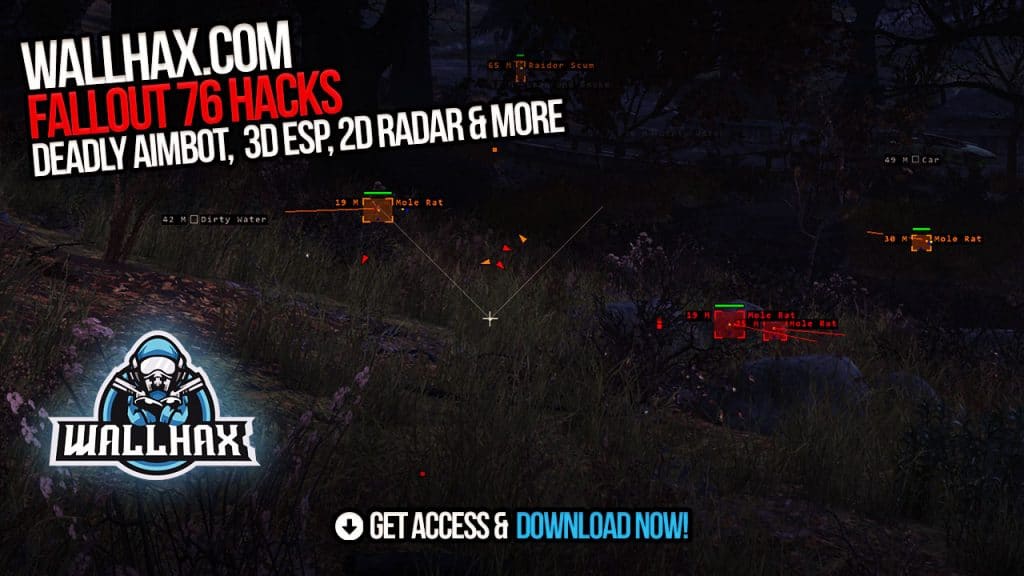 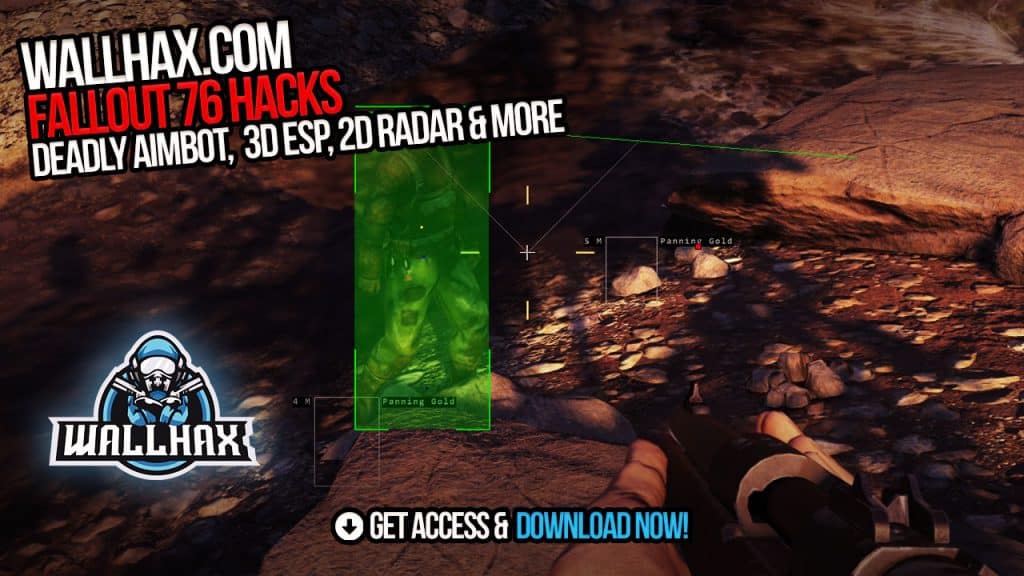 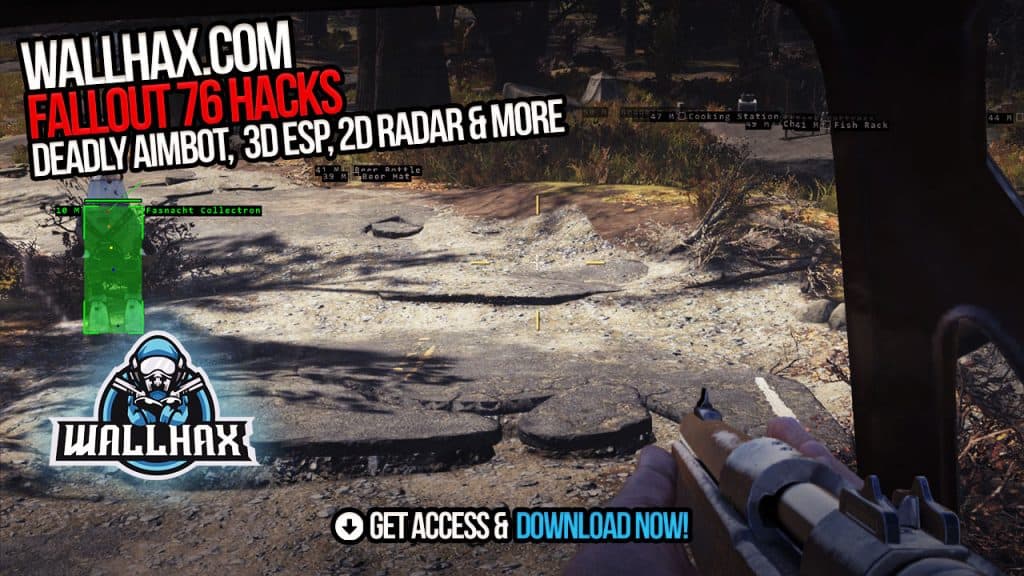 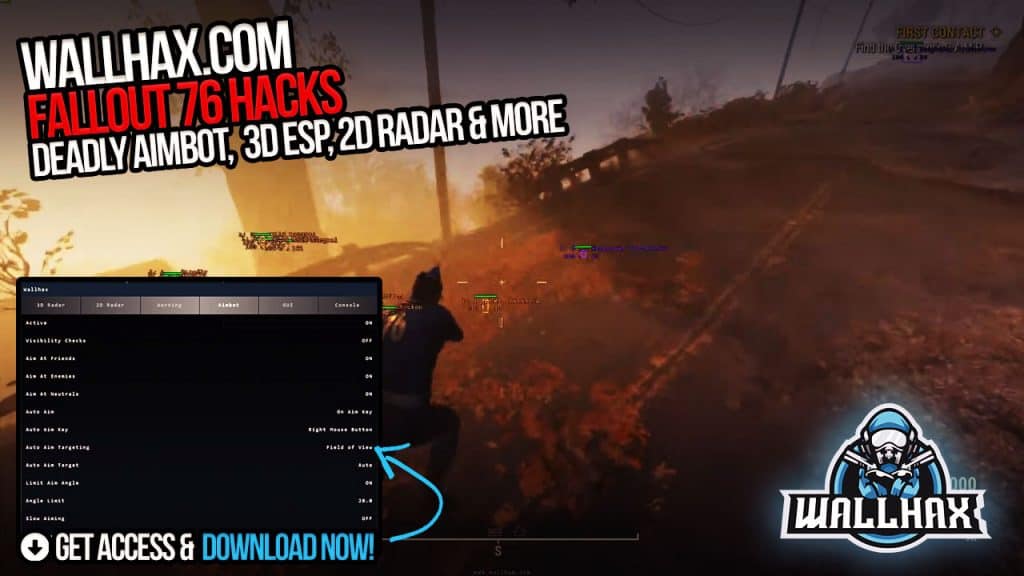 Change The Game With  Fallout 76 Cheats  For PC

Blast through Fallout 76 quests faster than ever before with help from Wallhax’s ESP. See every NPC in your vicinity, and track down valuable mobs for loot, or quickly complete quests. The aimbot helps you cut down any enemy that stands in your way. And you’ll be able to progress through the game and acquire resources even faster with assistance from our ESP cheats.

Want to dominate in open world PVP? See exactly where other players are with ESP and 2D radar, letting you hunt them down with ease. If you’re chasing after a bounty target, you’ll have the game-changing knowledge to help secure a kill. When you catch up, take them out with headshot after headshot with the bone aimbot.

If you’re trying to build up your base, keep it protected with 2D radar that lets you track any approaching targets. You’ll know long before any opponent even gets close which way they’re coming from, and will hold the upper-hand in any combat encounter.

See The Latest  Raving Testimonials  From Our Fallout 76 Members

Having a great time using fallout 76 cheats. Its crazy how good this is.

👍 Fallout 76
This is the end all of all fallout 76 hacks 😃 recommended.

😎 Wallhax Testimonial
I've used their cheat for multiple games now like, ARK, Destiny 2, Fallout 76, Sea of Thieves and its amazing.. Really gives you the advantage to dominate other players with no worries. Thank you so much its amazing..

Get The Wallhax Advantage With Our Fallout 76 Hacks! 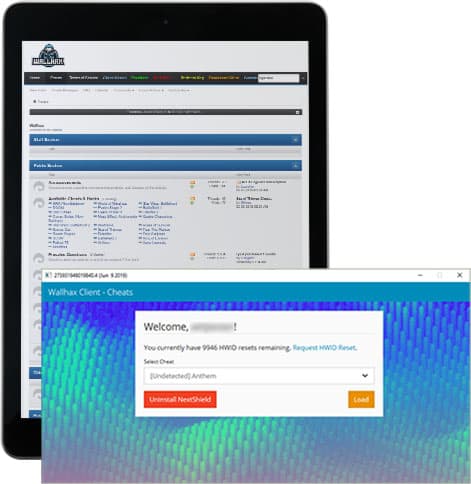 Gear Up With The Most Powerful Fallout 76 Hacks

Lock on to enemies with a precision aimbot, or track your opponents regardless of where they hide with deadly cheats for Fallout 76. Become the nightmare of other players, or farm entire bases of NPCs faster than you ever could before with these game-changing hacking features.

Everyone wants to start playing the latest Fallout game from developers Bethesda Game Studios and publisher ZeniMax Media. At E3, Todd Howard confirmed that there would be a beta of Fallout 76 before its release date of November 14th. During the game’s beta, cheat developers started working on developing their cheat features for the game. When the game released we were able to fully release our cheat as the premier cheat for the game. Over the past months we've improved the cheat further with more ESP options. You can signup for a VIP membership to download the cheat now.

Unlike previous Fallout games, 76 is an entirely online experience. Many people have compared it to Rust, though it remains to be seen how much it may differ. All humans in the game will be players, though that still leaves room for friendly NPCs in the form of ghouls and robots. This makes sense, as Fallout 76 only takes place a few decades after the bombs dropped in West Virginia. Therefore, the only humans alive would be those leaving the vaults, others who survived the basts would have become ghouls, and many robots built before the blasts could still be active.

The game will feature base building as a large feature, as well as the ability to move your base. This is one of the features that remind people of rust, as the game has been billed as a survival title. Hacks for the game will make it much easier to build up your base quickly and farm for materials.

There is also the ability to drop nukes on the map. To accomplish this, it’ll take a group of players to get the necessary items, and then clear out a large installation filled with hostile NPCs, a bit like a dungeon or raid you might see in an MMO or Destiny type game. Then, you’ll be able to drop a nuke on the map, and head there to pick up whatever loot is left behind.

The game is also offering open world PVP. This means that while you’re minding your own business, another player can come along and shoot you. It’s unclear what incentive there is for PVP in the open world, and whether other players can get loot off your body. But we’ll be glad to have aimbots and ESP at the ready none-the-less.

The Top Hack Features In FO76

Player ESP – With this cheat feature you can see exactly where other players are. This will help you avoid being ganked, or alternatively hunt down other players near you. With ESP, even if someone is hiding behind a wall lying in wait, you’ll know exactly where they are.

Bone Aimbot – This Fallout 76 cheat lets you lock on to enemy players or NPCs, making you fully accurate against opponents so you don’t waste a single bullet. The aimbot is way more effective than using VATS and having the game set your accuracy percentage.

2D Radar – This feature gives you a box on your screen that shows dots around your character to indicate where other players or NPCs are in your vicinity. This can be a very helpful feature if you want to keep track of your surroundings without constantly looking around.

Want To Build The Ultimate Base In Fallout 76? 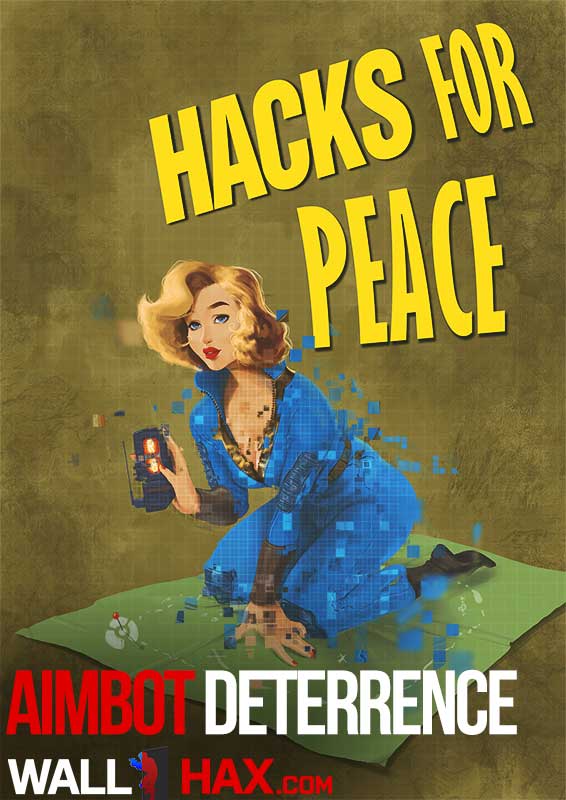 Build your base even faster with available private hacks for Fallout 76! With resource ESP cheats, you can quickly find valuable resources without having to waste tons of time looking around. Just make a bee-line straight to the best stuff! With faster resource gathering, you can build and upgrade your base even more quickly, keeping enemy players and NPCs out.

Dominate Your Opponents in PVP

Want to terrorize every noob on the map? With a Fallout 76 hack, you can become a living god of the wasteland, always knowing where every nearby player is, and being able to lock on to them with a deadly headshot aimbot. With that kind of damage and a handy sniper rifle, no one will be able to stand in your way.

With Fallout 76 now available, we have released our cheat with our aimbot, ESP, 2D radar and more! Create your forum account below and join the community!