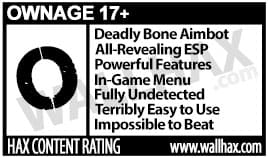 Top the Scoreboards and win all your matches with our deadly cheat. (For US/NA Game Version)

Wallhax gives you the ultimate advantage in with our feature loaded and fully undetected Knives Out hack. Track your foes and hunt them down with the help of our complete 3D player ESP that will show every opponent around you. Take luck out of the equation with our deadly bone aimbot letting you get easy headshots and maximize your accuracy even over long distances!

Make every bullet count with our incredibly accurate headshot aimbot. Using our custom algorithms, this feature locks your reticule to your opponent so you can spray them down with lead before they know what’s happening. Configure every setting through our in-game menu.

Track every other player around you with full ESP that give you the tactical advantage you’ve been looking for. Whether your opponent is in a structure, hiding behind a tree or just over the next ridge, you’ll always know right where they are. Enhancing your awareness are additional ESP features including nametags, player health, and head indicators.

Load your cheat in a matter of seconds from Wallhax’s dedicated cheat client. Through our software, you’ll always receive the most up-to-date version of the cheat.
Couple this with Wallhax’s easy-to-use cheat menu where you can toggle and configure each individual feature or just stick to the default settings, and you will be topping the scoreboards in no time!

Get Your Knives Out (NA/US) Cheat Access Now With VIP!
All About Knives Out Hacks

Knives Out is a PUBG-like title where you play against 100+ other people in a race to gear yourself out, stay alive, and be the last man standing on the island. Why do you ask? Well, for great rewards in the form of boxes containing random cosmetic items to gear out your character with! And, I suppose, for glory!

Normally in ‘Knives Out’ you’ll try to drop down to the ground as quickly as possible, pick up a gun and then start to scavenge for more gear and items while taking out any other players you come across. Of course, the odds are not in your favor. With matches containing 100+ other players, your chances of being taken out are much higher than the likelihood of managing to be the last one standing. And while you can grind out credits by playing over and over and picking up a kill here and there, you really want to be #1! We’ll be talking about how you can achieve that with a Knives Out hack a bit later on.

There are a lot of things keeping you from winning in Knives Out. Not only do you have to be lucky with where you drop from the plane and what items are available, but you have to hope someone else doesn’t end up in the same area as you and finds a gun before you do, or you’ll probably end up dead. Then, even once you have a weapon, you don’t know where anyone else is on the map, so you can easily be picked off from afar by someone with a sniper or automatic rifle. Not only that, but sometimes game bugs or lag can also spell your doom, and there isn’t much to be done about that. You may even run into others using Knives Out hacks, letting them see exactly where you are or giving them superhuman accuracy.

A Knives Out hack is a program that modifies the game memory to give you abilities that you wouldn’t normally have. In the case of our cheat, those happen to be ESP and an aimbot. ESP is a feature that lets you see the locations of where players are by drawing boxes or other information around them. That can include nametags, health information, distance, where they’re looking, and even more! This info can be quite helpful to help you stay alive at the beginning of the match, as well as hunt down anyone who comes across your path.

For instance, if you end up parachuting down into the same location as another player, you’ll want to avoid them until you have a gun. If they find you after they have a weapon, you won’t be long for this world. But even if you just have a melee weapon, with the Knives Out ESP you can probably get a kill. You can track their position and stay on the other side of a door or wall and ambush them. In a situation like that, even if they have a powerful gun it’s quite possible you’ll catch them by surprise and get the kill.

The aimbot is another feature of our cheat and is found in many FPS cheats. The Knives Out aimbot will lock onto enemy players and ensure nearly every bullet is accurate, so you can quickly take down your opponents with just about any weapon. You can activate the aimbot with a single button press, and all of a sudden the Knives Out hack is doing all the aiming for you. Even if an enemy is running at full speed, you can still easily hit them using the aimbot. Using this in conjunction with the Knives Out ESP gives you a massive advantage in the game.

If you are looking to download a hack for Knives Out, you may have found us. While you might want to try to find a free Knives Out cheat, know that free cheats are often fake or viruses, as few people will code cheats and release them for free. Private cheats often have more, or more polished features, and are more likely to remain undetected. If you are looking for a feature packed, undetected Knives Out hack, look no further than Wallhax!

Download The Knives Out (NA/US) Hack With VIP Membership!