Top the scoreboards with deadly aimbot & ESP cheats in multiplayer on PC! 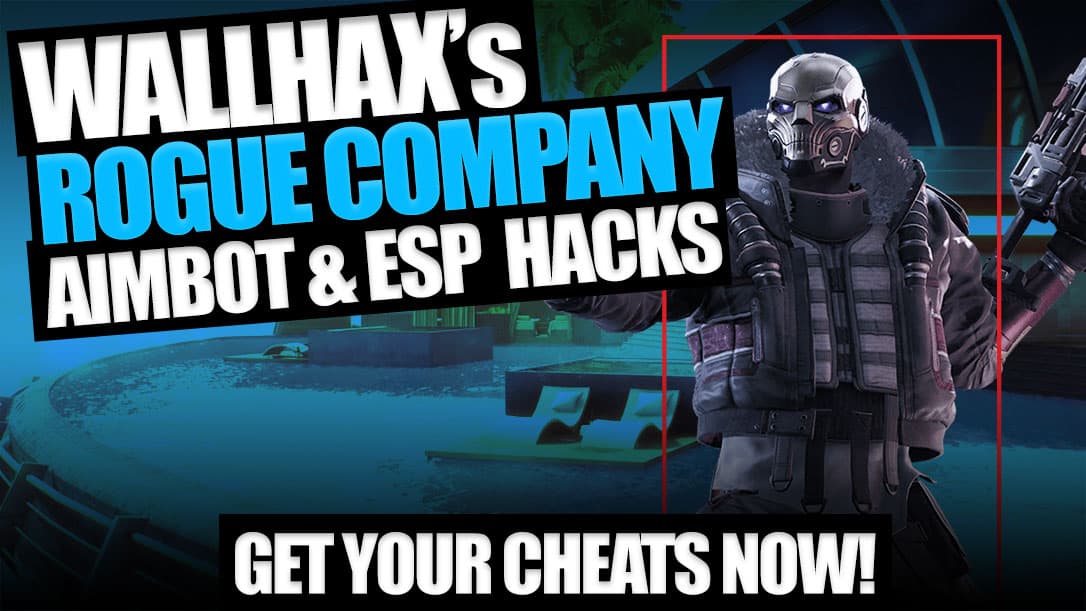 Win every match and own the scoreboard PC with the help of game-changing cheat features from Wallhax. When you load your hack into Rogue Company, take advantage of our deadly bone aimbot, 3D ESP, 2D Radar and much more all accessible from an easy, in-game menu where you can create your perfect, winning config.

Your opponents won't know what hit them when they get taken out almost immediately with precision aim and constant headshots. Dominate the other team, and load up on currency, complete missions, and earn new unlocks faster than ever before!

How Do You Hack Rogue Company?

It's incredibly easy to start dominating in Rogue Company with Wallhax's cheat software. After you've created your account and chosen your Rogue Company cheat subscription, you'll be able to download our dedicated cheat client which makes injecting your cheats securely into any game we support incredibly easy.

From the cheat client you can easily stream the latest version of the software from our servers, see the current status of each supported game, as well as see the latest software updates we've made.

The cheat loading process only takes a matter of seconds, and you cheat will be inected into the game. At that point, the cheat menu will open, and you can use the default feature settings which are ready to go 'out of the box', or start building your perfect configuration which you can save for later and continue to iterate on. You can configure just about every aspect of the features, from ESP color to whether you see healthbars and nametags or boxes and tracelines.

Get easy kills with our deadly, lock-on aimbot that lets you stay at the top of the scoreboard every round as you single-handedly eliminate the competition with kill after kill. You'll be unstoppable with our fully customizable aimbot, which lets you all-out rage or look legit with a wide range of configurable options.

Playing with a rifle and a high magnification scope? Get headshot after headshot with customizable bone aiming that lets you prioritize the head for maximum damage. If you're getting close and personal with a shotgun, prioritizing centre-mass will let you maximize your damage and eliminate multiple players before they know what hit them.

Plan Your Every Move With 3D ESP

With the help of our ESP features, you'll always know exactly where your opponents are, letting you play around their position and get easy shots from around corners or after flanking their position. From the moment you deploy and your team plans where to glide on the map, you'll already know where your opponents are heading, giving you the ability to out-maneuver them from the moment the match starts.

Take advantage of the numerous ESP options included, from nametags, to boxes, healthbars, tracelines, bone ESP and much more.

In the midst of combat, our 2D radar can be essential, giving you an always visible indicator of where off-screen allies and enemies are. Avoid being flanked by a sneaky opponent using 2D radar to spot when an opponent is getting behind you. Configure our radar to your liking, whether you prefer a dedicated on-screen radar box, or want to remove the background and place it over your crosshair to keep your radar overlay in the center of your view.

With our Rogue Company hacks released soon, you'll have no trouble winning every match you play, easily completing missions and ranking up to unlock more items and cosmetics faster than ever before in the game. Create your cheat account now as the Rogue Company software will be available soon!

The latest multiplayer shooter from Hi-Rez, well known developers of titles like Smite, Rogue Company puts you in the role of an elite agent tasked with saving the world.

One element that makes Rogue Company unique is its focus on 60 FPS on console gameplay, and cross-play on just about every current console including PC. You'll be able to play with friends and other players from every console eco-system including Xbox, Playstation, Switch and PC. This should help give the game a larger audience, and with F2P there's likely to be a lot of players checking the game out.

The game features a number of game modes, including a 4v4 mode called 'Extraction', where you play as an attacker or defender of an objective, with one life per round. There's also 'Strikeout' which keeps an objective but gives each team a number of respawns, giving you the option to eliminate the opponents to remove their respawns.

With access to hacks like our aimbot and ESP, you'll be able to dominate in every one of these game-modes. The only thing you'll have to worry about is wrecking your opponents so hard that they leave the game!

Each time you spawn in Rogue Company, you'll be able to glide down to the map and essentially choose where you enter the map. This is similar to the parachuting and gliding mechanics commonly seen in the battle royale genre, but slightly more limited in Rogue Company. You can only glide so far so you typically won't be able to go from the air straight into the action.